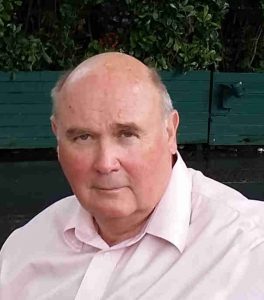 Some background and work philosophy

When I was nine years old our family physician, whose hobby was observing variable stars, exposed me to astronomy and started me on the path to becoming a scientist. Later, during a college summer job, I encountered computational modeling and liked it a lot! Fast forward 50 years or so and I am still modeling and calculating and solving problems.

My graduate research and early professional work (analyzing plasma instabilities using kinetic theory) required long, operationally intense, derivations just to get to the starting equations from which analysis could commence. I struggled with those calculations and realized symbolic computing systems emerging at that time could be of use. My first experience was with a system called Reduce, then came Macsyma. A typical research project involved coupled symbolic computing with classical scientific computing performed in FORTRAN. I am open to using whatever computational tool is appropriate for the task so along the way I picked up C, C++, Lisp, as well as special purpose languages. I started using Mathematica when it became available in 1988 and it gradually became my primary computational tool.

A particularly useful aspect of Mathematica is its “notebook” interface that allows you to not only generate and record calculations but to annotate those records. I have accumulated thousands of Mathematica notebooks during my physics and financial careers. I can usually resurrect an old notebook and get it working within minutes. I wish I could say the same about my work with other computer languages, much of which lies moldering on papers and ancient floppies stored in my garage.

I suspect that some of the notebooks I have developed will be of interest to students and others and will share them on this website. I had hoped the technology for displaying Mathematica notebooks on web browsers would have developed by now. Since that hasn’t happened I will use WordPress as a content manager and display the notebooks as .pdf files. See the Guidelines tab for more details.

In both science and quantitative finance, I worked with mathematical/computational models. Here are two of my favorite quotes about models.

My work has involved lots of problem solving. I am inspired by the famous last words on Feynman’s blackboard.

“What I cannot create I do not understand.”
“Know how to solve every problem that has been solved.” – Richard Feynman

Feynman created with just pen and paper. I require a computer. The mathematician Gregory Chaitin captures Feynman’s sentiment for me.

“Well, the computer changes epistemology, it changes the meaning of “to understand.” To me, you understand something only if you can program it. (You, not someone else!) Otherwise you don’t really understand it, you only think you understand it.” –Gregory Chaitin

So that’s what I do. I try to understand models and solve problems by coding the required operations. I use the symbolic manipulation tools of Mathematica to work through derivations and calculations in sometimes excruciating detail. I record my efforts in Mathematica notebooks.

Does working this way help you to understand?  I just encountered a delightful quote in a new book by Ian Stewart. When asked by Edmund Halley how he knew planets follow elliptic orbits, Isaac Newton replied

“Why, I have calculated it.”

This website contains notebooks on diverse topics that are only loosely connected. As to why I chose this topic over that, why I covered X, but didn’t do Y, and completely ignored Z – I have another quote.

“You see, you can’t please everyone so you’ve got to please yourself.” –Rick Nelson, Garden Party

By way of disclaimer, I comment that I endeavored to ensure my results are accurate, often by calculating things in more than one way. However, I am sure there are residual errors. Readers should be very careful about using any result that they do not fully understand and in which they lack confidence – especially in financial contexts. During my financial career I encountered an amazing collection of errors, often made by highly competent, experienced people – errors in calculation, errors in concept, errors in interpretation, errors in the misapplication of models, typographical errors, coding errors, copy and paste errors, careless errors caused by haste, and so on.  Again, be careful out there.

I make no claim of originality in these notebooks. Indeed, many of the notebooks constitute my take on classical topics. I worried about originality and appropriate referencing when I was a working scientist but such concerns have faded. I try to mention references that were important to me in developing a notebook but almost certainly missed some. Should a reader feel I have been unfair about not referencing a contribution, please email me and I will endeavor to make amends.

References to my scientific publications are here.

Lists of my financial writings are here.